At first, going keto sounded like a dream come true. (All the cheese, bacon and guac we want? Sign us up.) But then we realized this meal plan banned us from eating carbs (womp womp) and thought this also meant giving up those late-night stops at the world’s most wonderful fast-food spot, Taco Bell. But no: As long as you nix a few key ingredients, you can totally stick to your diet and still indulge. Read on for our 10 favorite keto Taco Bell menu hacks.

How to Eat Keto Bell at Taco Bell, at a Glance

Generally speaking, if you avoid these items (or ask for them to be substituted with extra meat, cheese, sour cream or guac), you’ll be good to go:

Nevertheless, you can have these in moderation and still make it work on keto. Keto is a low-carb, high-fat, moderate-protein diet, but you can have between 20 and 50 grams of carbs to remain in ketosis. (Once you’re in ketosis, your body won’t rely on carbs for energy anymore; instead it will burn through existing stores of fat, which leads to faster weight loss than other diet plans.)

Taco Bell also has a handy online nutrition calculator that allows you to personalize your orders, so you know exactly how many carbs you’re consuming post-substitutions. (We included the net carbs for the following menu items, which you can find by subtracting the fiber from the total carbs.) Now, our favorite swaps from the menu.

Ditch the tortilla and the beans, make it a bowl instead and bam: This menu staple is keto-approved. You still get to enjoy the beef filling, nacho cheese sauce, cheddar cheese and sour cream.

Maybe you love Taco Bell so much that you want it for breakfast. You do you, friend. Just be sure to ask them to swap out the tortilla for a bowl and add extra bacon, cheddar cheese or sour cream to make it more filling. (Pico, guac and lettuce are options, too.)

This pick is nothing but grilled chicken, cheddar cheese and creamy, smoky chipotle sauce. Even if you keep the tortilla, it comes out to only 15 net carbs. But if you ditch it in favor of a bowl, it’s practically carb free.

This item is higher in carbs than the rest on this list. But most keto dieters can stay in ketosis if they eat 25g carbs or less per day. So, thanks to beans’ high fiber content, this vegetarian favorite is on your diet (as long as you nix the tortilla).

This bowl is loaded with more than enough food to keep you full, even after you pass on the seasoned rice and black beans. We’re talking grilled chicken, cheddar cheese, iceberg lettuce, tomatoes, guac, sour cream and avocado ranch sauce.

Heading back to the Bell for breakfast is a breeze when you’re eating keto. Nix the potato bites, opt for a bowl instead of the tortilla and bask in the sausage-y, eggy, cheesy goodness. Add sour cream or hot sauce to make it more decadent. 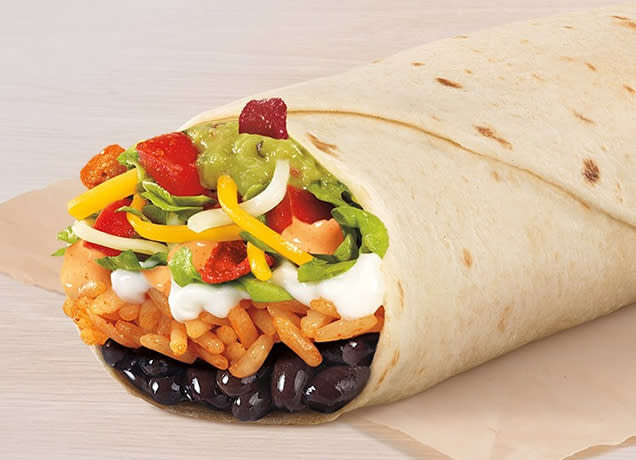 Don’t sleep on this value menu gem. If you get rid of the tortilla and tortilla strips, you’ll be left with a satisfying mix of black beans, seasoned rice, cheese, guac, sour cream, tomatoes and creamy chipotle sauce. Nix the rice to get the net carbs down to 7g. 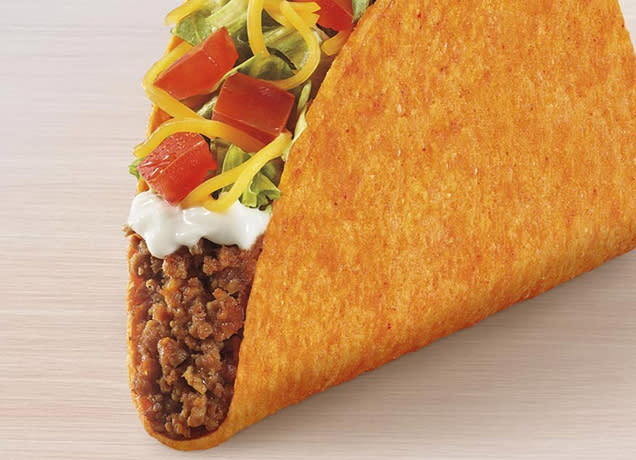 Sans-substitutions, you can fit this favorite into your meal plan as long as you’re strictly low-carb for the rest of the day. Savor the famously cheesy Doritos shell, filled with seasoned beef, cheddar cheese and iceberg lettuce. Make it supreme to add tomatoes and sour cream.

You’ll need to part with the carby gordita flatbread and crunchy taco shell to make this one work, but don’t fret: The spicy ranch sauce (along with seasoned beef, cheddar cheese, a three-cheese blend and lettuce) is the most important part anyway.

Cutting black beans from larger menu items helps bring down the carb content. But if you have them solo, they’re Keto Taco Bell-friendly at 7g total carbs due to the small portion size. They also contain 3 grams of fiber, which brings the net carb content down even more. Zhuzh them up with guac, sour cream, jalapeños or hot sauce.