Philips Ambilight – Ultra HD LED TV Review: Televisions are mostly made for their main purpose. They have little to do with design and beauty. But from time to time we see very attractive and shiny things in it. One of these is Philips’ Ambilight technology, which enhances the immersive and amazing viewing experience, especially in dark rooms, where the LED can shine right behind the TV. The latest television from Philips takes this concept to a bigger level in India with more affordable prices than ever before.

Philips Ambilight 55 Inch 55PUT7906The /94 variant comes for Rs 99,990 which is a standard Ultra HD LED TV from the company’s Ambilight 7900 series. Ambilight LED lighting has been given in it on three sides. Also there is Dolby Vision and Dolby Atmos support. It runs on Android TV operating system. Is this the most interesting TV under Rs 1 lakh you can buy in India? Find out in this review.

The Philips Ambilight 7900 Series TVs come in three sizes including 55-inch, 65-inch and 75-inch TVs. Their price ranges from Rs 99,990 to Rs 1,89,990. All three TVs have been given the same specifications and features, including three side Ambilight LED lighting in the back side of the TV. ,

From the front and rear, this TV looks like a modern budget TV or mid-range TV. The borders around the screen are slim, the bottom also houses a logo, module for the IR receiver, indicator light and a multi-function physical button to control power and volume.

The TV is a bit thick but slim at the edges, allowing easy access to the ports on the left side even after hanging it on the wall. The 55-inch variant weighs 14.2 kg without a stand. It is compatible with VESA wall mount which is not available in the box. The box has a table stand which can be fixed near the corners of the TV. This means you will need a large table to hold the TV.

The Philips Ambilight 7900 Series TV looks like a simple TV from the outside, but when you turn on the TV, its main features come to the fore. LED lights have been given in the frame of the TV, which are located on the left, top and right sides. They scatter colorful lights on the wall behind the TV. These lights are very bright, so that even if the TV is placed on the table, it scatters a lot of light behind the wall.

Most of the ports on the Philips Ambilight 7900 Series 55-inch TV are arranged in a rectangular slot at the back that faces down. This means that you will have to do most of the connections beforehand before putting the TV on the wall. Ports on the rear include digital audio-out (TosLink), a USB Type-A port, RJ45 Ethernet port, antenna socket, and three HDMI ports.

The ports on the left side are easy to access, even if the TV is wall-hung. These include an HDMI port (with ARC support), a 3.5mm headphone jack, and a USB Type-A port. The company has done a smart job by giving ARC enabled port on the side. 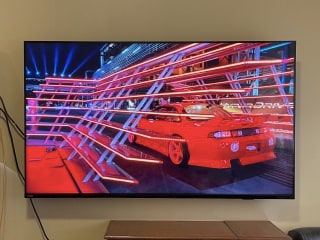 Philips Ambilight 55PUT7906/94 LED TV features an Ultra HD (3840×2160 pixels) screen. It supports HLG, HDR10, HDR10+ and Dolby Vision in high dynamic range. For sound, the TV has two full-range bottom-firing speakers with a total sound output of 20W, and support for various audio formats up to Dolby Atmos. The TV has Bluetooth 5 and dual-band Wi-Fi connectivity. There’s 8GB of internal storage for apps and app data, as well as a quad-core processor to power software and interfaces that haven’t been specified.

Philips Ambilight/Ultra HD LED TV Review: Televisions are mostly made for their main purpose. They have little to do with design and beauty.

The company has given a full size remote with the TV, which is a bit bigger as per the requirement. The remote has buttons for navigation controls, playback controls, input selection and a classic number pad. Hot keys are provided for Netflix, Amazon Prime Video, Google Play and YouTube as well as Google Assistant. Microphone for voice commands is also available in the remote.

An info button has been given on the remote which tells the resolution and internet speed. Apart from this, there is also an Ambilight button, which allows quick access to the Ambilight menu and to toggle Ambilight Effects on or off, as well as modifying the settings.

Initially the remote worked fine. But after a few weeks I found that it was working only when I put it in front of the IR receiver. It happened within just one night while it was working fine on the first day. Changing the battery and resetting the TV also did not make any difference. Bluetooth connectivity was working only for Google Assistant. Surprisingly after a few days the remote started working fine again, so it was important to point this problem out here.

Unlike the Ambilite, the Philips 55PUT7906/94 TV is fairly modest in terms of features. The TV has built-in Chromecast for content casting and Google Assistant for voice commands.

Philips Ambilight 7900 Series 55 Inch LED TV runs on Android TV, OS 10. It looks a bit like Google TV. It gets the same main experience as the rest of the Android TV. The TV gets access to the Google Play store, which has more than 7000 apps and games.

Apps like Netflix, Amazon Prime Video and YouTube come pre-installed in the TV. Based on these, TV also makes content recommendations. It may be a step behind the Google TV UI, but the stock Android TV user interface is also a good option.

Apart from the problem with the remote, I found a lack in its user interface performance at some places. There was a slight delay in reaction while navigating the UI, which was visible in the picture as well. It’s a good thing that there was no such problem while playing the original content, but I found it easier and more convenient to switch to Chromecast with Google TV.

Nowadays, quantum dot or OLED TVs are available for less than Rs 1 lakh. It sounds crazy to spend that much money for a Philips Ambilight 7900 Series 55-inch LED TV. Although the Ambilight effect itself is quite unique. Brands like Govee and Philips now provide solutions to setup LED lighting in TVs even after purchase. Still, the company’s Ambilite feature is easy to use, and controlling it via the TV remote also makes it special. But, I wonder if ambilighting alone is enough to make it premium?

The TV features an Ultra HD resolution LED screen with HDR support up to Dolby Vision. The performance is quite good with high quality content. The picture looks as sharp as it can be. But it has some flaws which I cannot expect in a Rs 1 lakh TV.

Spider-Man: Into the Spider-Verse would be perfect to begin with. Bright colors were visible and trippy comic book style visuals looked good while watching the movie. Enjoyed watching this movie on TV with Ambilight Function and I didn’t get disappointed.

The work that Ambilight did with the film was quite impressive. The bright colors on the screen coupled with the bright lights running behind the TV made the picture feel bigger and more vibrant than the original. The Ambilight effect was able to make the colors read faster at the edges of the screen and flow along the screen, making the fun of fast-moving colorful content different.

Ambilight couldn’t do much with Better Call Saul’s monochrome scenes and muted colors. It felt better to switch it off here. I found that the effect looked better when the Ambilight were mounted on a white wall. The effect was diminishing on the textured blue wall.

Philips Ambilight settings on the TV are easy to control, which is a good thing. Presets have also been given for this, so that you can control its intensity. When set to lounge lighting, it has lighting in a single color. The picture in Into The Spider-Verse was quite sharp. The picture in Madaba too was very colorful and bright. Colors looked good but were not at all punchy compared to the cheaper Xiaomi OLED Vision TVs.

The backlighting of the display was giving a whitewash effect in dark scenes, which made blacks look dark gray. Such performance can be expected from an affordable LED TV, so I was disappointed with this TV here. The Philips Ambilight 7900 Series TV is quite bright, thanks to its LED display. Because of this, it can be easily seen even in a room with a lot of light. In such a situation, if the light in the room is reduced even by dropping the curtains, then the picture looks very good. Here TVs like Hisense 55U6G are brighter and cheaper as well.

HDR support has been provided in the TV till Dolby Vision, but the TV does not get much benefit from it. There is only a slight improvement in brightness and colors when switching to HDR as compared to SDR content. It was not as seen on other televisions including the Sony X75K, which performed well even with only HDR10 capability.

The TV properly upscales the low resolution content. HD and FullHD movies and TV shows look good in terms of sharpness on it. There is no problem with motion, color and contrast. The sound quality of the TV cannot be called amazing, but it is not bad either. The 20W speakers perform a little less than expected. The sound of the TV is enough for a small room. In large rooms the volume has to be increased. Dolby Atmos doesn’t improve the sound much. Overall the sound experience can be said to be fine.

The Philips Ambilight 7900 series LED TV is quite unique. You can buy it because of its Philips Ambilight system. It may seem unnecessary in the beginning but it proves to be very effective in increasing the viewing experience. However, for the Rs 99,990 price tag, the lighting effect alone doesn’t do it full justice.

Talking about the performance, the TV performs like a TV of 60 thousand or around it. In which the company’s own 8100 series 55-inch TV is also included. The black level seems to decrease. Even the overall brightness is not able to fulfill it. At the same time, there were some strange problems with the remote as well.

If Ambilight system is the most exciting thing for you then you can consider buying this TV. It works really well and it definitely adds to the entertainment that the customers want on TV. If you don’t mind Ambilight, then you can look at Xiaomi OLED Vision TV, which is present as a much better option than Philips Ambilight TV for the same price. Baby Dolls With Blinking Eyes: There are hundreds of possibilities to choose from when determining which baby dolls with blinking...